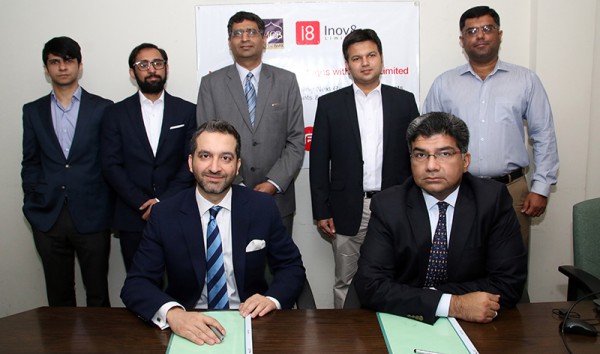 Lahore, 14.04.2016: MCB Islamic Bank Limited (MIB) and Inov8 Limited, the region’s fastest growing digital payments company, have signed an agreement by which the Bank will be using Inov8’s next generation FalconPay Ecosystem. This will allow MIB to offer next generation mobile payments and commerce, retail payments, G2P and P2G payments, and instant Asaan Account and card issuance at the customer’s doorstep.

This is the first time in the history of Pakistan that a Bank and a Fintech Company have collaborated to enable their customers to have access to a combination of mobile payments, internet payments, inter and intra bank fund transfers, ticketing, retail payments etc. at such a scale. The FalconPay Ecosystem will allow the Bank to target new market segments within the conventional banking framework including the unbanked in combination with the Asaan Account Management System. This will create accessible digital channels for the Bank to leverage its conventional branch banking creating a distribution channel as effective and as big in scope as of that of the leading players of the branchless banking industry.

On the occasion, MCB Islamic Bank Limited’s President, Ali Muhammad Mahoon stated, “We are excited to be partnering with Inov8 on this initiative due to the strength of their team and their next generation technology. As a young bank we need to leverage disruptive technologies and innovation to help level the playing field, and we found the FalconPay Ecosystem to be doing what the likes of Apple Pay and Google Pay are doing internationally and RuPay is doing across the border. We see this initiative as a means to easily acquire new customers for the bank and to provide an unmatched digital experience to the customers.”

On this partnership Inov8 Limited’s Co-Founder and Co-CEO, Bashir Sheikh expressed his views by saying, “We see great potential in this new partnership with MCB Islamic Bank and their dynamic team as they set off on their journey as the newest bank in the market. The FalconPay Ecosystem is being rated as the complete one-stop platform catering to a bank’s digital payment and user experience requirements and we are happy to have MCB Islamic Bank’s endorsement on this.”

Inov8 Limited is the Region’s fastest growing digital payments company and has grown to become a leading partner to banks and mobile operators, both locally and internationally. The company recently secured Series A Funding of $5.4 million and achieved a valuation in excess of $100 million. Inov8 is the dominant player in the Pakistan market offering next generation products designed to address all facets of the digital financial services and commerce value chains.

MCB Islamic Bank Limited (MIB) is a wholly owned subsidiary of MCB Bank Limited (MCB).  The bank was granted Commencement of Business by SBP in September 2015, and established its first Branch in November 2015.  MIB is currently awaiting execution of demerger petition from the Honorable Lahore High Court whereby the Islamic Banking Group (IBG) of MCB shall be demerged from MCB to MIB.  MCB IBG was established as a division in Muslim Commercial Bank in 2003 and has been successfully providing Shariah compliant products and services to customers interested in Islamic Banking.

After the execution of the demerger petition by the Honorable Lahore High Court, the thirty-four (34) branches of MCB IBG shall transfer to MIB. Currently with six (6) branches, MIB is planning to have a sixty-six (66) branch network by Dec 2016.